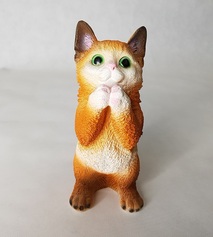 It was believed that cats "have seven lives" and have supernatural powers. Belief in the supernatural power of cats has existed since the days of Ancient Egypt, where cats were deified. Byet, the goddess of love, fertility and feminine sensuality, was portrayed as a cat or a woman with a cat's head. The Egyptians saw the dilation and contraction of the cat's pupils as symbolizing the waning and waning moon, which made this animal also a symbol of the moon.

The cat was revered in the form of a large cat that killed the mythical snake Anophis, who in the "Book of the Dead" tried to overturn a solar boat. For the Egyptian priests, the cat was a symbol of the magical forces of nature and eternity, as it lay curled up in a ring. Among the inhabitants of Thebes, the cat, called the "Lady of the Sky", was the personification of the fertilizing power of the sun, protecting it from snakes during sleep. When a domestic cat died, its owners shaved off their eyebrows, thereby expressing their grief. When a noble Egyptian died, for his journey to the afterlife, his favorite things were left in the tomb, among which was a mummy of a cat and several mice, so that the cat would not starve during the journey.

Whoever killed a cat, even by accident, was sentenced to death in Egypt. In China, the character for a cat is the same as for the number 80, which makes the cat a symbol of long life. The Chinese cat was a symbol of clairvoyance, also associated with the moon. He was credited with demonic powers and the ability to see the spirits of the night. White cats were endowed with the ability to turn into evil spirits at night, because they steal the rays of the moonlight, while in European countries it was black cats that were associated with black magic. For example, when a witch climbed onto a broomstick, a cat would also climb onto it. Muslims believed that the cat was born in Noah's ark from the sneezing of a lion. He saved Muhammad from the snake and, since the prophet stroked him on the back, he acquired the ability to fall exclusively on his paws. Therefore, in Islam, the black cat is endowed with magical powers. The Pawnees Indians of the North American tribe considered the wild cat a symbol of agility and resourcefulness.

It should be noted that in England the black cat was also considered a symbol of good luck, possibly due to the belief that he possesses some of the magical power inherited from the witches, especially if such a cat crossed the road. Due to the independence of temper and unacceptability of training, the cat became the emblem of freedom in ancient Rome: the goddess of Liberty was portrayed with a cat lying at her feet. The Romans also considered the cat to be the guardian spirit of the house.

Please, pay attention that according with the  "Delivery terms of international orders", tea, coffee and orient souvenirs are not avaliable for international delivery and passed to shipping only together with flower production.

Cuddly toy, gift balloons, chocolates&sweets, and greeting cards You can add to your order.
We can make a picture of a recipient at the moment of delivery a gift.