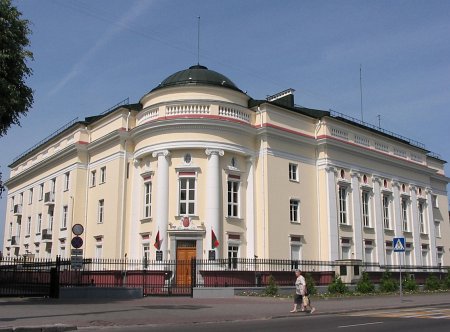 Vitebsk developed from a river harbor where the Vitba River (Віцьба, from which it derives its name) flows into the larger Western Dvina, which is spanned in the city by the Kirov Bridge.
Its official founding year is 974, based on an anachronistic legend that it was founded by Olga of Kiev, but the first mention in historical record is in 1021, when Yaroslav the Wise of Kiev gave it to Bryachislav Izyaslavich, Prince of Polotsk.
In the 12th and 13th centuries Vitebsk was the capital of an appanage principality which thrived at the crossroads of the river routes among the Baltic and Black seas. In 1320 the city was incorporated into the Grand Duchy of Lithuania as a dowry of the Princess Maria, the first wife of Algirdas. In 1597, the townsfolk of Vitebsk were privileged with the Magdeburg Rights. However, the rights were taken away in 1623 after the citizens revolted against the imposed Union of Brest and killed archbishop Josaphat Kuntsevych. During the First Partition of Lithuanian-Polish Commonwealth in 1772, Vitsebsk was annexed by Russian Empire.
Under Imperial Russia the historic centre of Vitebsk was rebuilt with the Neoclassical architecture. By the Second World War, Vitebsk had a significant Jewish population: according to Russian census of 1897, out of the total population of 65,900, Jews constituted 34,400 (so around 52% percent). The most famous of its Jewish natives was the painter Marc Chagall.
In 1919, Vitebsk was proclaimed as a part of the Socialist Soviet Republic of Byelorussia, but soon transferred to the Russian Soviet Federative Socialist Republic and later to the short-lived Litbel. In 1924, it was returned to Belarus.
During World War II, the city was under the Nazi occupation (10 July 1941 - 26 June 1944). Much of the old city was destroyed in the ensuing battles between German and the Red Army soldiers. Most of the local Jews perished in the Vitebsk Ghetto massacre.
In January 1991, Vitebsk celebrated the first Marc Chagall Festival. In June 1992, a monument to Chagall was erected on his native Pokrovskaja street and a memorial inscription placed on the wall of his house.
Since 1992, Vitebsk has been hosting the annual Slavianski Bazaar in Vitebsk, an international art festival. The main participants are artists from Russia, Belarus and Ukraine, with guests from many other countries, both Slavic and non-Slavic.